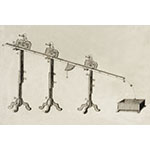 If a body is dropped without being given any initial momentum, it will fall to the ground vertically. Its velocity does not remain constant but increases with time. Using various contrivances to slow it—such as the inclined plane—Galileo (1564-1642) discovered that the velocity of free-falling bodies increases in constant increments in successive equal intervals of time. Galileo was thus the first to establish that acceleration is proportional to the time of fall starting from a position of rest. He was also the first to establish that, in natural motion, the distances traveled from the state of rest bear the same relationship to one another as the squares of the times traveled. The constant increase in fall velocity is now called gravitational acceleration. In the late seventeenth century, scientists examining the fall of bodies in tubes under vacuum were able to verify experimentally what Galileo had predicted on theoretical grounds—namely, that gravitational acceleration is identical for all bodies. In a tube under vacuum, a feather and a lead ball dropped at the same time reach the ground simultaneously. As Isaac Newton (1642-1727) was the first to demonstrate, the gravitational acceleration of bodies is actually due to the Earth's gravitational attraction on them, and is always proportional to their mass. The attraction varies only if the body leaves the Earth's surface or is moved to another planet whose mass is different from that of the Earth.