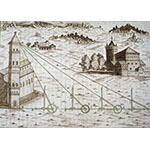 Instrument for astronomical and terrestrial measurements, also called triquetrum, whose invention is attributed to Ptolemy (second half 2nd century C.E.). According to the description by Antonio Santucci (16th-17th Cs.) in his manuscript Trattato di diversi instrumenti matematici (1593), the instrument is composed of two pivoting rods, like compasses, divided lengthwise into 100 parts and fitted with a protractor at the hinge. A third rod pivots at the end of one of the main rods. Its length is equal to the diagonal of the square constructed from the two main rods, and it is thus divided into 141 and 2/5ths parts. It serves as the base of the triangle formed by the three elements. The instrument is used to measure the height of the Sun on the horizon, the distances between celestial bodies, and terrestrial distances, as well as for surveying. In the latter application, and because of its structure, it may be regarded as the prototype of the archimetro.