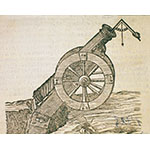 Quadrant consisting of two arms of unequal length joined at a right angle and fitted with a graduated arc. At the vertex of the right angle is suspended a plumb bob that shows the degrees on the graduated arc. Was typically used to measure the elevation of artillery pieces, by inserting the longer arm into the gun mouth and reading the inclination on the degree scale with the plumb bob. A variant of this instrument, designed for measuring heights and distances, used a shadow square instead of the graduated arc. Both variants of the instrument were published by Nicolò Tartaglia (1499-1557) in Nova scientia (Venice, 1537), a treatise in which ballistics, formulated with rigorous geometrical methods, is presented as a new discipline of the mathematical sciences.