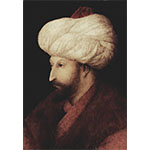 The Hegira (in Arabic, "flight") denotes the year in which Muhammad was forced to flee Mecca. Muhammad was bitterly opposed by the town's merchant community because of his attacks on traditional polytheism and the ancient system of worships and beliefs, and his assertion of the existence of a single God (Allah). On July 16, 622 C.E., he left Mecca for Medina (Madinat-ed-Nebi, i.e., the town of the prophet), where he continued to preach. Muslims have taken the date of this departure as the start of their era. The Muslim calendar is based on the lunar year (354 days, 8 hours, 48', 33"), composed of 12 months with alternate durations of 30 and 29 days. To adjust for the residual 8 hours, 48', and 33", a 30-year cycle comprises 19 years of 354 days and 11 years of 355 days. In the second group of years, the last month of the year has 30 days rather than 29. In practice, 33 Muslim years correspond to 32 Christian years. This calendar is still in use in the Muslim world.