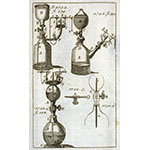 The hydrogen lamp was designed by Alessandro Volta (1745-1827) c. 1777. A jet of hydrogen in a gasometer was ignited by a spark from an electrophorus or a Leyden jar. The resulting flame lit a candle. This apparatus was substantially perfected by German makers and scientists in the late eighteenth century. It became a popular demonstration instrument and one of the fastest and most efficient systems to produce fire or provide a convenient light source at night. The device—more aptly described as a lighter than a lamp—was very common, particularly in German middle-class homes. It remained in use until the mid-nineteenth century.