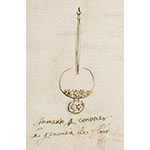 Also known as a gravimeter, densimeter or areometer, the hydrometer is used to measure the specific gravity (density) of liquids. It consists of a float immersed in the liquid under examination. There are two ways of determining specific gravity: the first is to read the section of the scale above the float that emerges from the liquid; the second is to gauge the weights that help the hydrometer to float at a level defined by a reference mark.

The oldest description of the hydrometer is in a letter of c. 400 C.E. from Synesios of Cyrene to his teacher Hypatia (370-415), a famous scientist of Alexandria, daughter of the neo-Platonic mathematician Theon (4th C.). The invention of the hydrometer was formerly attributed to Archimedes (287-212 B.C.E.) or Hypatia herself. In 1612, the instrument was described by Galileo (1564-1642) in a letter to Nozzolini; in 1648, Raffaello Magiotti (1597-1656) forwarded a description to Don Lorenzo de' Medici. Hydrometer shapes have varied over the centuries. The Accademia del Cimento commonly used three models: a glass float with a graduated pipe; a version with small pans or baskets suspended from cords and chains; and a spherical design. Other variants are fitted with rings to be added or removed depending to the liquid in which the instrument is immersed.

The second half of the eighteenth century and the nineteenth century saw the design and patenting of several types of sophisticated hydrometers that found extensive applications in industry and manufacturing for the rapid, efficient determination of specific weight and liquid concentration in different solutions. The better-known models include those developed by Antoine Baumé (1728-1804) and William Nicholson (1753-1815).