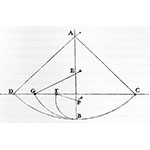 A principle first discovered by Galileo (1564-1642) in the late sixteenth century: the oscillation period of pendulums of equal length is constant—i.e., the oscillations are isochronous or tautochronous—regardless of the amplitude of the oscillation. In fact, as Christiaan Huygens (1629-1695) demonstrated in 1659, isochronism applies only to pendulums with cycloidal oscillations. When Galileo proposed his method for determining longitude at sea and on land in the 1620s, he envisaged using the isochronism of the pendulum to make exact measurements of the local time. In 1637, Galileo considered using these properties of the pendulum to regulate the motion of clocks.