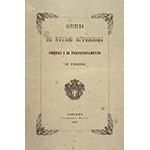 The Istituto di Studi Superiori Pratici e di Perfezionamento of Florence was established in 1859 under the provisional government of Bettino Ricasoli (1809-80), when the Lorraines had left Tuscany for good. The Istituto succeeded the Liceo di Scienze Fisiche e Naturali (founded in 1807) and continued its work. As its name clearly indicated, the Institute had two missions: to provide further training for university graduates and to conduct basic scientific research. The Istituto also sought to promote cooperation and exchanges between science and the humanities. It comprised three departments: Medicine and Surgery; Natural Sciences; Philosophy and Philology. It initially included a Legal Science department, which, however, proved short-lived. In 1872 the National Parliament approved a program allowing the Institute to reorganize and expand into an increasingly university-like body. In later years, the sections gradually recast themselves as full-fledged Faculties. In 1923, the Istituto became the Università degli Studi of Florence.