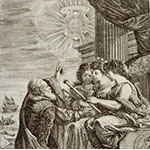 The four heavenly bodies discovered in 1610 by Galileo (1564-1642), who named them Medicea Sidera [Medici Stars]. Initially Galileo wanted to call them Cosmica Sidera, in honor of Cosimo II de' Medici (1590-1621), Grand Duke of Tuscany from 1609. It was the Grand Duke himself who preferred to tie the sensational astronomical discovery to the family name rather than to his personal name. The discovery of Jupiter's moons, announced by Galileo in the Sidereus Nuncius [Starry Messenger] (Venice, 1610), revealed the existence of celestial bodies orbiting around a body other than the Earth—a phenomenon that appeared incompatible with the prevailing Aristotelian-Ptolemaic tradition.