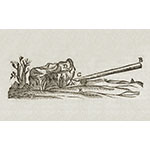 The lever is a simple machine that consists of a rigid beam swinging around a pivot called a fulcrum. At each of the beam, two forces are applied, one called the effort, the other the load. They tend to make the lever swing in opposite directions. Levers are classified into three orders.

In the first-order lever, the fulcrum is located between the application points of the two forces. A typical first-order lever is the crowbar used to loosen or lift heavy bodies; another is the oar on a rowboat: the oarlock is the fulcrum, while the rower applies the effort that overcomes the water's resistance. Other examples of first-order levers are platform scales with arms of equal length and the steelyard.

In the third-order lever, the situation is reversed: the effort is applied between the fulcrum and the load. A typical example of third-order lever is the forearm, which moves around a fulcrum, namely, the elbow joint. The effort is provided by the arm muscle attached near the elbow, while the load is the weight of the forearm. The advantage of this system is that a slight contraction of the muscle suffices to generate a wide movement of the forearm.