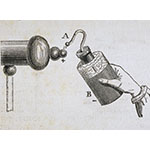 Electrical condenser consisting of a glass bottle, vase, or flask lined on the inside and outside with tin foil. Named after the Dutch town of Leiden, one of the first places where it was developed c. 1745. Batteries composed of many large Leyden jars could store significant quantities of energy that could be used to produce spectacular phenomena such as melting metal wires and shattering thick glass panes. Continuously perfected, Leyden jars remained in use until the early twentieth century to generate the first oscillating circuits for wireless telegraphy.