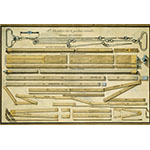 The meter is the standard international unit of length. It is denoted by the letter m, which, by international convention, is written in roman, like the other letters denoting units of measurement. On May 8, 1790, the French National Constituent Assembly approved Talleyrand's proposal to define a unified system of weights and measures. The preparatory work was entrusted to a commission of the Académie Royale des Sciences of Paris, comprising distinguished scientists including Jean-Charles de Borda (1733-1799), Joseph-Louis Lagrange (1736-1813), Antoine-Laurent Lavoisier (1743-1794), Mathieu Tillet (1714-1791), and the Marquis de Condorcet (1743-1794), joined by Pierre-Simon de Laplace (1749-1827) and Gaspard Monge (1746-1818). The unit of length was named the meter. It was defined as the forty-millionth part of the terrestrial meridian, measured between Dunkerque and Barcelona. The next step was the production of the prototype meter, deposited in 1799 at the Conservatoire des Arts et Métiers in Paris. In 1875, the International Bureau of Weights and Measures was established. It promoted the construction of a new and more precise prototype consisting of an X-shaped cross-section bar. The new standard was deposited with the Commission in Sèvres, near Paris. As measurement methods improved, it became apparent that not even this second meter was exactly equal to the forty-millionth part of the terrestrial meridian. To avoid being forced to alter all the benchmark copies of the Sèvres unit, a decision was taken in 1889 to define the meter not as a fraction of the meridian, but as the "length of the standard meter in Sèvres." Today the meter is defined as the distance traveled by light in a vacuum in 1/299,792,458th of a second. As also occurred with units of measurement used in antiquity, the word meter—in a number of languages—came to mean both the instrument for measuring lengths and the unit of measurement of those lengths. In conformity with the decimal system, the meter has a series of multiples and sub-multiples.