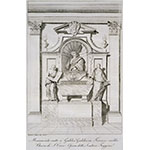 After Galileo's death in Arcetri in 1642, his remains were deposited in a small room adjoining the chapel of Saints Cosmas and Damian, in the basilica of Santa Croce in Florence, pending the construction of a monumental tomb. The project encountered the hostility of the ecclesiastical authorities, who pointed out to Grand Duke Ferdinand II (1610-1670) the inappropriateness of building a monument to a man condemned by the Church for "vehement suspicion of heresy." In the following decades, Vincenzo Viviani (1622-1703) campaigned strenuously for the memorial, but failed to overcome ecclesiastical resistance. Only at the end of the reign of Gian Gastone (1671-1737), in 1737, did circumstances permit the inauguration of the monumental tomb of Galileo, visible today on the left when entering the basilica. The sepulchre received the mortal remains of Galileo and of Vincenzo Viviani.