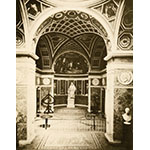 The unification of Italy ended the rule of the Lorraines in Tuscany. The Museo di Fisica e Storia Naturale of Florence, which had already been extensively remodeled, was shut down and its collections transferred to the departments of the new Istituto di Studi Superiori. However, the displays of ancient instruments in the Tribuna di Galileo and adjacent rooms were preserved and renamed Museo di Antichi Strumenti, while La Specola was turned into a zoological museum. The Museo di Antichi Strumenti remained intact until the founding of the Istituto di Storia delle Scienze in 1927.