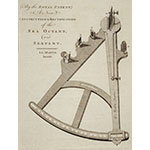 The octant (eighth part of the circle) marked the first evolution in the design of the quadrant as a basic navigational instrument. It measures the altitude of the Sun and other celestial bodies above the horizon. From this datum, one can determine the latitude using numerical tables. The instrument consisted of an eighth of a circle divided into 45° and fitted with sighting optics. It was also used on land to find the distance between two points. In the late eighteenth century, the octant was replaced on ships by the sextant (sixth of a circle), whose 60° arc afforded a wider field of view.