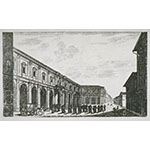 Founded in 1288 by Folco Portinari, father of Dante's (1265-1321) beloved Beatrice, the hospital flourished under the Medici regime. The Medici entrusted its management to a body of "Spedalinghi" [hospitallers], chosen from the nobility. In modern terms, the institution could be described as a general hospital.

Closely linked to the history of the hospital itself is the Scuola di Chirurgia [School of Surgery], where distinguished doctors engaged in teaching hospital procedures. Their scientific work and the hospital's cultural legacy are reflected in the rich library.

In the Renaissance, we find the earliest mention of a "Spezieria" [apothecary's shop], where medicines were prepared from the plants grown in the botanical garden created for the purpose.

In 1688, inside the hospital a "spedaletto" [small hospital] for use as a "pazzeria," i.e., an asylum for the mentally ill.

The hospital organization was substantially improved under Peter Leopold (1747-1792): close ties were established between the medical education activities and the hospital; regulations were introduced concerning the number of staff, professors, and lecturers, their teaching and medical duties, and their pay. An obstetrics school was added in 1762, and pharmaceutical chemistry laboratories in 1880.