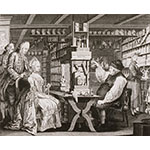 Until the early Renaissance, pharmacy comprised a set of empirical practices that formed an integral but secondary part of medicine. Thanks to Paracelsus (1493-1541), close ties were established between pharmacy and alchemy, and the latter was designated as a branch of medicine whose basic task was to prepare inorganic drugs. In the Renaissance and early modern age, pharmaceutical methods acquired a firmer scientific basis and the catalogue of plant and mineral therapeutic substances was expanded. Iatrochemistry or medical chemistry provided a decisive stimulus to pharmaceutical progress, and the modern chemist acquired a social and occupational standing as a pharmacist. Pharmaceutical chemistry was very successful in France, and the pharmacist Nicolas Lémery (1645-1715) made valuable contributions to the development of chemistry and medicinal preparations. The founding of the Collège de Pharmacie in Paris in 1777 marked the official advent of the professional pharmacist and the obsolescence of the often ambiguous figure of the apothecary. The eighteenth and nineteenth centuries saw the publication of the first journals specifically dedicated to pharmaceutical research, such as the Journal der Pharmacie (1793-1834) edited by Johann Bartholomäus Trommsdorff (1770-1837).