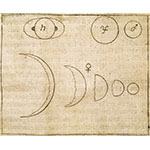 In the Ptolemaic system, Venus moved on an epicycle between the Earth and the Sun, a path whose center was aligned with the Sun's mean position. The epicycle served to describe the planet's Zodiacal motion; but it also implied phenomena invisible to the naked eye. If Venus had been a sphere illuminated by the Sun, it would have displayed phases (from the Greek fásis = appearance) different from those of the Moon: at perigee and apogee (conjunction with the Sun), the planet would have turned its dark side toward Earth; near the Sun's maximum elongations it would have appeared, at best, as a slender illuminated sickle. When Galileo Galilei (1564-1642) began observing Venus with his telescope in 1610, he noted instead that the planet exhibited phases similar to those of the Moon. After the perigee, there appeared a thin sickle that extended to the middle of the disk as the planet neared maximum elongation, then kept widening until the apogee, when Venus was fully illuminated. Galileo saw the phenomenon as proof that Venus did not move on an epicycle located between the Sun and the Earth; rather, it followed a circle centered on the Sun. Despite the fact that the geocentric system of Tycho Brahe (1543-1601) accommodated the phases of Venus, Galileo argued that the phenomenon confirmed the heliocentric system advocated by Nikolas Copernicus (1473-1543) in De revolutionibus orbium caelestium (1543).