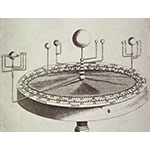 Planetarium is the generic term for a mechanical contrivance that reproduces the motions of the planets and, sometimes, of their satellites. Operated by hand using cranks or clockwork mechanisms. Planetaria—in particular the English-made models—were widely diffused in the eighteenth and nineteenth centuries. When fitted with special gear trains, they also give a fairly precise reproduction of the ratios between the planetary revolution periods (in the clockwork models, the Earth typically completes its annual orbit around the Sun in about ten minutes). On the other hand, the dimensions of the celestial bodies and the distances between them are not usually shown to scale, and the planetary orbits are often represented by simple concentric circles around the Sun. However, by means of ingenious mechanical arrangements, some planetaria—such as those of Ole Römer (1644-1710) and Christiaan Huygens (1629-1695)—provide a reasonably faithful replication of the elliptical inequality of the planets, i.e., their Keplerian motion around the Sun. The term orrery is often used in English-speaking countries as a synonym of planetarium. But it more properly denotes the devices that also reproduce the Earth's diurnal motion (with a specific mechanism for maintaining the terrestrial rotation axis parallel to itself) and the Moon's revolution around the Earth. The term refers to Charles Boyle (1676-1731), fourth Earl of Orrery, to whom the London maker of scientific instruments John Rowley (c. 1665-1728) dedicated this type of device. The first models were produced by George Graham in the early eighteenth century. A planetarium that does not represent the Moon is called a tellurion or tellurium; if it mainly represents lunar motions, it is called a lunarium. An apparatus that reproduces the motions of Jupiter's moons is known as a jovilabium: one that reproduces the motions of a comet is called a cometarium. In modern times, the term planetarium denotes a sophisticated projection apparatus located inside a hemispheric dome—sometimes a few tens of meters in diameter with a capacity of several hundred spectators. The planetarium creates a highly realistic view of the sky as it appears to the terrestrial observer. The first modern planetarium was built by the Zeiss firm of Jena in 1923 for the Deutsches Museum of Munich.