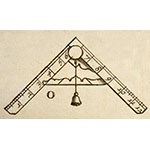 Instrument for military and civil use that measures the inclinations of planes. Usually consists of a triangle from whose apex is suspended a small pendulum or plumb line. The two legs are joined by a crosspiece divided into degrees. The base may be flat or curved, depending on whether the instrument is for civil or military use (the curved base enables the instrument, known in this case as a "gunner's level," to be placed on the cannon breech to determine its elevation). Whatever the instrument's position, the plumb line shows the vertical and allows a reading of the inclination on the graduated bar. The level was widely used not only in artillery but also on construction sites to check that walls were perfectly horizontal.