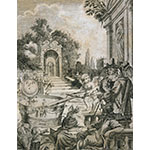 For the Greeks, pneuma meant "air," "breath," or even "spirit" or "soul." But by the 5th century B.C.E. the corporeity of atmospheric air had been established by empirical means and air had become one of the four elements—along with fire, water, and earth—that were believed to be the building blocks of all matter. The process that led to the full understanding of the physical nature of air began in the sixteenth century, after the invention of the air pump by Otto von Guericke (1602-1686). Using such a pump, Robert Boyle (1627-1691) measured the essential role of air in combustion and vital phenomena. The chemical composition of air was deciphered only later. Stephen Hales (1677-1761) demonstrated that plants "breathed" the air they "fixed." In 1756, Joseph Black (1728-1799) showed that Hales's "fixed air" differed from atmospheric air and took part in chemical reactions. This discovery opened a new field of experimental investigations, which led to the isolation of the different "airs" and the formation of the concept of gas.