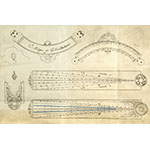 The polygon scale is found on a number of measuring instruments, from the surveying compass to the radio latino to proportional compasses. Serves to draw regular polygons, generally from the equilateral triangle to the dodecagon. From a common point of origin, the signs of the scales indicate the length of the sides of the various figures inscribed within the same circle, whose diameter is given by the length of the scale itself or, in the case of proportional compasses, by the aperture of the legs. The figures are indicated by a symbol or by a number corresponding to the number of sides.