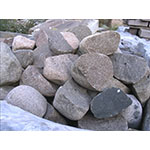 Generic name for an effusive rock of volcanic origin, whose hardness and resistance to wear, compression, and shock make it ideally suited for many uses. Its color, which depends on the type of iron content, displays many chromatic nuances and variants. Because of its beauty, porphyry was employed in ancient Assyrian-Babylonian and Egyptian civilizations, and has since remained in continuous use in architectural and sculptural works. One of the three steps leading up to the gate of Dante's Purgatory was made of red porphyry: "The third, resting above more massively, / appeared to me to be of porphyry, / as flaming red as blood that spurts from veins" (Purgatorio IX, 100-102). Cosimo I de' Medici (1519-1574) was particularly fond of porphyry, which he chose for many projects that expressed continuity with the ancient classical and imperial tradition.