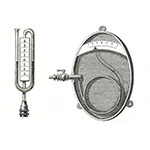 Generic term denoting various types of devices for measuring pressure. To measure the "vacuum" of air pumps—i.e., sub-atmospheric pressures—the most commonly used pressure gauges (or manometers) until the nineteenth century were directly derived from barometers. They consisted of U-shaped tubes with a closed arm and an open arm, partly filled with mercury. In the twentieth century, instruments based on molecular phenomena were invented to measure stronger vacuums. For industrial purposes, and for gauging super-atmospheric pressures, Bourdon's manometers came into widespread use starting in the mid-nineteenth century. They comprised a flattened and curved metal tube filled with the liquid whose pressure had to be measured (air, vapor, etc.). A mechanism connected the tube to a pointer. A change in fluid pressure modified the tube curvature, causing the pointer to move.