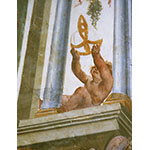 Developed by Peter Bienewitz (known as Apianus, 1501-1552), the instrument is adapted from the trigonometric grid, already known to the Arabs, for computing sines and cosines. Primum mobile was the name given to the ninth heaven of the Ptolemaic universe, which lay beyond the sphere of fixed stars and moved the underlying spheres in a rapid, 24-hour rotation. The instrument was called Primum mobile because it was used by astronomers to determine the true locations of celestial bodies.