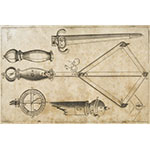 Instrument invented by Latino Orsini (c. 1530-c. 1580) and described in Trattato del Radio Latino published in Rome with a commentary by Egnazio Danti (1536-1586) in 1583 and 1586. It was used to measure distances, heights, depths, gun elevation, and the level of plane surfaces, as well as for surveying. The instrument consists of a central rod on which are hinged four jointed rods forming a parallelogram and fitted with sights. The rods carry several measurement scales such as the scales of degrees, the shadow square, the division into braccia (1 braccio = c. 2 ft.), the compass rose, the angles of regular polygons inscribed in circles, and the diameters of artillery shot. In the handle is inserted a compass. When shut, the instrument was stored in a sheath, giving it the appearance of a dagger.