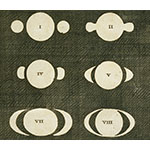 In some observations conducted in 1610, Galileo (1564-1642) saw Saturn as tricorporeo [three-bodied], i.e., composed of a central body and two lateral bulges, which he mistakenly thought to be satellites. In 1655, Christiaan Huygens (1629-1695), thanks to a more powerful telescope, observed Saturn's rings for the first time. He described them accurately in Systema Saturni (The Hague, 1659). The Accademia del Cimento was concurrently investigating the nature of the rings. Between 1671 and 1684, Giovanni Domenico Cassini (1625-1712) discovered four satellites of Saturn, in addition to the one previously found by Huygens. Cassini also observed and studied the divisions between the rings. Recently, the Voyager space probes have revealed that the many concentric rings are thin bands consisting of countless rock and ice fragments that orbit the planet and reflect sunlight.