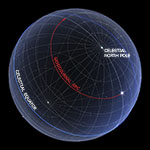 An experiment will show that, when we photograph the night sky with a fixed camera, the stars do not leave a dot-shaped trace on the film. If the camera is not equipped with a motor to track the daytime rotation of the celestial sphere, the photograph will show each star slowly describing an arc of a circle in the sky, around the north celestial pole. The arc's length will be proportional to the exposure time. Generally, the term semidiurnal arc denotes the parallel arc of the celestial sphere traveled by a celestial body (star, Sun, Moon or planet) in twelve hours during its apparent motion around the Earth.