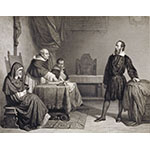 The formal condemnation of the Inquisition Tribunal was read to Galileo (1564-1642) in Rome on June 22, 1633: "We say, pronounce, sentence, and declare that you, the said Galileo, by reason of the matters adduced in trial, and by you confessed as above, have rendered yourself in the judgment of this Holy Office vehemently suspected of heresy, namely, of having believed and held the doctrine—which is false and contrary to the Sacred and divine Scriptures—that the Sun is the center of the world and does not move from east to west; and that an opinion may be held and defended as probable after it has been declared and defined to be contrary to the Holy Scripture; and that consequently you have incurred all the censures and penalties imposed and promulgated in the sacred canons and other constitutions, general and particular, against such delinquents. From which we are content that you be absolved, provided that you first, with a sincere heart and unfeigned faith, in our presence you abjure, curse and detest before us the aforesaid errors and heresies, and every other error and heresy contrary to the Catholic and Apostolic Church in the form to be prescribed by us for you. And, in order that this your grave and pernicious error and transgression may not remain altogether unpunished and that you may be more cautious in the future and an example to others that they may abstain from delinquencies of this sort, we ordain that the book of the Dialogues of Galileo be prohibited by public edict. We condemn you to the formal prison of this Holy Office during our pleasure, and by way of salutary penance we enjoin that for three years to come you repeat once a week the seven penitential Psalms. Reserving to ourselves liberty to moderate, commute or take off, in whole or in part, the aforesaid penalties and penance."