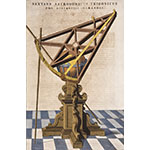 The sextant (sixth part of a circle) is an instrument primarily used in navigation for measuring the altitude of the Sun or a celestial body above the horizon at sea. From the Sun's altitude at its passage on the meridian, the user could compute the latitude of the observation point by means of numerical tables. The main parts of the sextant are a finder telescope and a 60° graduated sector with a pivoting arm. Holding the instrument vertical, the user aimed the telescope at the horizon. The index arm, fitted with a mirror, was then rotated until the Sun's image overlapped the horizon. The altitude was shown on the graduated scale. The instrument typically comes with several absorption filters to be inserted in the path of the Sun's rays. The sextant is also used in aerial navigation; in that case, the natural horizon line, often hard to distinguish, is replaced by an artificial horizon (the horizontal profile of a liquid). On land, the sextant can be used to measure the angle between the direction in which the telescope is aimed and the direction selected by means of the mirror on the rotating arm.