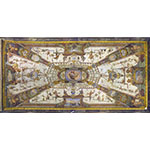 Small room next to the Tribuna del Buontalenti in the Uffizi Gallery, where Grand Duke Ferdinand I de' Medici (1549-1609) had installed the collection of scientific instruments begun by his father Cosimo I (1519-1574). The Stanzino was intended to house the instruments, the treatises explaining how to use them, maps, city plans, and wooden models of war machines and fortifications. The ceiling was frescoed between 1599 and 1600 by Giulio Parigi (1571-1635), with a "grotesque" decoration in which many vignettes faithfully depicted a significant part of the collection and scenes of famous inventions, ancient and modern.