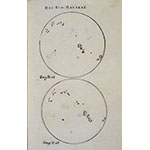 Sunspots were first observed by Galileo (1564-1642) in 1610. He believed they were flat clouds stuck to the Sun's surface; from their constant motion, he deduced that the Sun was rotating around its axis with uniform velocity. The discovery of sunspots challenged the ancient notion of the Sun as a perfect celestial body and the immutability of the heavens. Both theories were defended by the Aristotelians.

In March 1613, Galileo published in Rome a report entitled Istoria e dimostrazioni intorno alle macchie solari e loro accidenti [History and demonstrations on the solar spots and their characteristics]. We know now that sunspots, frequently grouped in pairs or clusters, have an approximately round and often irregular shape. They seem dark by contrast, being areas with a lower temperature than the rest of the solar surface; they therefore emit less energy then the surrounding regions. Sunspots can be easily observed by projecting on a white sheet the image of the Sun seen through a telescope.