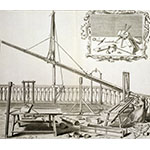 The set of mechanical parts (axes, counterweights, pads, etc.) that support an optical instrument and enable it to be aimed at a celestial object. For this purpose, mounts comprise two perpendicular axes around which the tube rotates freely and can thus be pointed in any direction (in mounts for binoculars and small telescopes, the two axes are replaced by a ball joint). The first telescopes in the early seventeenth century were hand-held or placed on makeshift supports. As telescopes grew bigger and more powerful, the mount became ever more essential for providing the required stability and for tracking the observed object by means of micrometric movements: the latter function is critical because, owing to the Earth's rotation, the object appears to move inside the field of view at a speed proportional to the magnification. 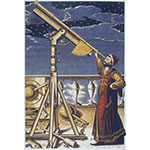 An altazimuth (or "alt-az") mount enables a telescope to rotate on a horizontal axis for altitude (angular distance above the horizon) and on a vertical axis for azimuth (angular distance computed clockwise from north). The tube can be mounted laterally ("cross-axis mount")—i.e., on a side bracket—or on a fork. To aim relatively long instruments (for example, most refractors) at the zenith, the fork is generally tilted away from the vertical axis (modified altazimuth mount). To track a celestial object with a telescope on an altazimuth mount, the instrument needs to be moved on both axes. This makes visual observation rather uncomfortable and excludes photography, which often requires long exposures. In recent years, however, the introduction of electronics has allowed high-precision guidance of the simultaneous movements of both axes as well as the rotation of the photographic plate. This has made the altazimuth mount popular again. It was used on the 6-meter-diameter Soviet telescope inaugurated in 1976 (which took away the record for world's largest telescope from the famous 5.08-meter Mount Palomar reflector), and is now fitted on all latest-generation large telescopes.

In an equatorial mount, one of the two axes, called right-ascension axis or hour axis, is aligned with the local meridian (north-south) and tilted horizontally at an angle equal to the latitude of the observation location. This makes the right-ascension axis parallel with the rotational axis of the Earth. The observed object can thus be kept centered without adjusting the second axis, called the declination axis. A celestial body can be tracked automatically by applying a clockwork mechanism or a suitably rated electric motor that enables the right-ascension axis to complete a revolution in 24 hours (i.e., the same velocity as the Earth's rotation on its axis). This not only makes visual observation much easier, but—even more important—allows photographic observation with exposure times of up to several hours. An auxiliary telescope—called a guidance telescope—with high magnification (up to 2-3 magnifications per millimeter of aperture) is used to spot small tracking errors during the exposure due to factors such as the imperfect alignment of the hour axis and gear play. These errors can thus be promptly corrected. 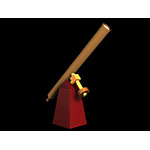 So called because it was first used, in 1823, for the refractor in Dorpat (now Tartu, Estonia), the masterpiece of the famous German optician Joseph Fraunhofer (1787-1826) and prototype of the modern refractor. In the German mount, the declination axis is placed at the top end of the polar axis; the telescope is mounted on one side of the declination axis and counterbalanced by a weight on the other. The preferred solution for refractors, the German mount is fitted on nearly all the major refractors in the world today, including the largest: the famous 40-inch (102-cm) telescope at Yerkes Observatory (Chicago). A variant, often employed for astrographs (photographic instruments with short focal length and wide field), is the modified German mount. It features a longer polar axis to permit a complete rotation of the instrument around the axis and thus allow long-exposure photography. 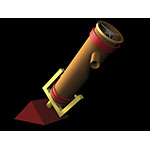 The declination axis is supported at one end by a U-shaped fork. This type of mount allows the instrument to be pointed in any direction. However, for observations near the celestial pole with small telescopes whose eyepiece is placed at the breech end, a 90° deflector (prism or flat mirror) is required. The typical mount for short and compact instruments, it is fitted on nearly all the large Schmidt telescopes (catadioptric telescopes with wide field and short focal length, for photography). In recent years, altazimuth fork mounts have also been used on many large reflectors of the latest generation, featuring very high aperture ratios. 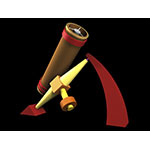 In the English mount, the ends of the polar axis rest on two supports of different heights. In the English cross-axis equatorial mount, the tube is mounted on one side of the declination axis and therefore requires a counterweight. The advantage of this design is high stability: for many decades, the English cross-axis equatorial mount was standard on large reflectors. In Italy, for example, it equips the 122-cm telescope of the Asiago observatory, made by the Officine Galileo and for many years the biggest in Europe. The mount owes its name to the fact that, having been initially designed by the English maker Henry Hindley of York in 1741, it was developed by Jonathan Sisson in the mid-eighteenth century and later adopted in English observatories, even for many refractors. However, it did not spread to continental Europe, where the German mounts were preferred. 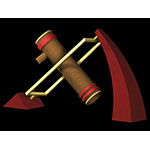 Variant of the English equatorial mount in which the tube is placed not on the side of the declination axis but in a frame resembling a fork enclosed on the top side as well. While extremely stable, the design does have a drawback: the instrument cannot be pointed at the celestial pole. Like the cross-axis version, it was invented by English makers, who also used it for large refractors—normally fitted with German mounts. Examples include the 11.75-inch (30-cm) Northumberland refractor, famous as the instrument used by Challis in his unsuccessful quest for Neptune, and the 28-inch (71-cm) refractor at Greenwich Observatory, commissioned in 1894. Elsewhere, this type of mount was fitted on the 100-inch Hooker reflector at Mount Wilson Observatory, inaugurated in 1918 and the world's largest reflector at the time. The famous 200-inch (508-cm) telescope at Mount Palomar Observatory, which captured the record from the first, is equipped with a variant called the horseshoe mount or U-shaped mount, in which the top end of the yoke has a curved profile. This puts the celestial pole within range of the telescope.