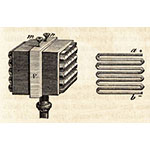 The thermoelectric effect was discovered in 1821 by Thomas Johann Seebeck (1770-1831). He examined a circuit comprising two wires made of different metals—such as iron and platinum or bismuth and antimony—welded together at their ends. Heating one of the junctions generates a weak electric current roughly proportional to the difference in temperature between the two welds. This arrangement is called a "thermocouple." If the circuit comprises several metal pairs joined together, the arrangement is known as a "thermoelectric battery" or "thermopile," by analogy with the Voltaic electrochemical battery. The apparatus was developed by Leopoldo Nobili (1784-1835) and Macedonio Melloni (1798-1854).