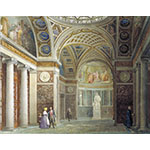 Built by Grand Duke Leopold II (1797-1870), the Tribuna di Galileo was opened for the Third Congress of Italian Scientists held in Florence in September 1841. Planned by architect Giuseppe Martelli (1792-1876) inside the Museum of Physics and Natural History, it has frescos and bas-reliefs representing the instruments, the scientific discoveries and the protagonists of the progress of experimental sciences. In the centre of the Tribuna is the statue of Galileo (1564-1642), and to its right, in a niche, were originally exhibited the proportional compass, an armed magnet and the middle finger of the right hand of the Pisan scientist. On its left were exhibited two Galilean telescopes and the objective lens with which he discovered Jupiter's moons. Behind the statue today there are still the busts of his disciples: Benedetto Castelli (1577/8-1643), Bonaventura Cavalieri (1598-1647), Evangelista Torricelli (1608-1647) and Vincenzo Viviani (1622-1703). The Renaissance instruments and those used by the members of the Accademia del Cimento were housed in cases specially designed. In the adjoining rooms was the Museum of Ancient Instruments.