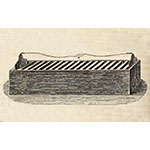 Alessandro Volta's (1745-1827) traditional vertical-pile or column battery had the disadvantage that the round cloth pads were compressed by the weight of the metal disks, causing them to lose the liquid in which they had been soaked. By contrast, the trough battery may be described as a horizontal-pile battery. Designed by William Cruickshank, it consists of a rectangular wooden box lined with shellac for insulation. The zinc and copper plates were welded in couples whose length was equal to the inside width of the box. They were secured to the shellac in such a way as to leave a small space between each couple. These compartments or "troughs" were filled with a solution of water and sulfuric acid, producing the same effect as the pads in Volta's column battery. The two poles were connected by metal wires attached to the two copper plates immersed in the outermost troughs.