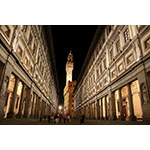 Above the "Uffizi" [offices] of the Florentine magistrates, Francesco I de' Medici (1541-1587) built the Gallery, to provide a larger and better-organized home for the Medici collections of art, natural wonders, and instruments and machines. An octagonal room, called "Tribuna," was built in the Gallery. Mathematical instruments were exhibited in the adjacent "Stanzino delle Matematiche." When the Stanzino was filled to capacity, the scientific instruments were transferred to the "Sala delle Matematiche" next door, decorated with frescoes of geographic maps. Sections of the ceiling in the corridor just outside the Sala depict Mathematics surrounded by scientists and instruments, including Galileo (1564-1642) with his telescope.