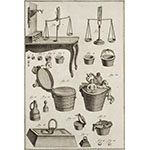 The history of weighing instruments is dominated by two models: the balance (or scales) and the steelyard. Both designs rely on the principle of the first-order lever to obtain equilibrium between a load and one or more weights of known value. 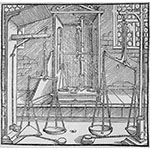 The term balance derives from the Latin bilanx, "two-scaled." In its simplest form—two equal arms and a central suspension—the balance is one of the oldest instruments invented by man. There are surviving examples from Mesopotamia and Egypt dating back to the fifth millennium B.C.E. The device was rapidly adopted by all ancient peoples, who, in the fourth century B.C.E, began using the steelyard as well.

The balance is a weighing instrument based on the lever principle. It consists of a beam oscillating around a fulcrum (generally knife-shaped) and carrying a pan at each end. Weighing involves comparing standard weights of known mass with an object of unknown mass. The deviations of the balance from equilibrium are shown by the pointer, either on a graduated scale or relative to a reference point. There are countless models of balances.

Uses a system of levers, one of which is counterweighted. The system is designed so that the pan carrying the object to be weighed shifts along the vertical axis as the counterweight changes. The weight is shown by a pointer on a graduated scale attached to one of the levers.

Denotes typically small balances that have no support and are held with one hand. 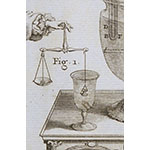 The hydrostatic balance is also called Archimedean balance. Archimedes (287-212 B.C.E.) uncovered a fraud by a craftsman who had given Hiero, Tyrant of Syracuse, a crown made of gold-silver alloy claiming it was solid gold. Archimedes's method and theoretical assumptions were closely studied by Galileo (1564-1642) in his Bilancetta, a brief text written in Florence in 1586 and not published until after his death. Galileo described a high-precision instrument—the bilancetta or "little balance"—whose operation was based on the Archimedean concept of specific weight. Bodies weighed in water are found to be "lighter" than when weighed in air. The difference is proportional to the ratio of their specific weight to that of water. With the hydrostatic balance, we can therefore determine a body's specific weight relative to that of the liquid in which it is immersed; alternatively, if we know the body's specific weight, we can determine its volume. 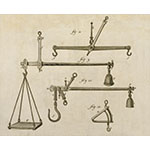 Whereas the balance consists of a beam with equal arms and two pans, the steelyard comprises a beam with unequal arms, a typically fixed fulcrum, and a single pan. It was very common in antiquity, and its invention was attributed to the Romans. The device is suspended from a hook, whose position represents the fulcrum. On the longer arm, which carries one or more graduated scales, runs what is called a "Roman" weight, i.e., a counterpoise. The shorter arm is fitted with a hook to carry the pan holding the object to be weighed. The counterpoise is shifted along the graduated scale until the longer arm reaches horizontal equilibrium. From the position of the counterpoise on the scale, we can therefore read the weight we want to measure. In the Roman era, balance-makers already realized that, by marking graduated scales on two or three sides of the beam, they could build steelyards with two or three capacity ranges. To each scale corresponded a different point from which the object to be weighed was suspended by means of a hook. The heavier the weight to be measured, the shorter the distance between the hook and the fulcrum.