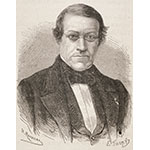 English physicist and inventor, taught experimental physics at King's College, London. Conducted extensive research on sound, light, and vision. Invented the reflecting stereoscope. Attempted the first measurement of the speed of electricity in wires using a system based on a mirror rotating at high speed. Invented several types of machines for electric telegraphy, of which he was a major pioneer. Also worked on underwater telegraphy, generators, and electric motors. His name was given to a bridge (simple circuit) for measuring resistances, whose design is still in use.