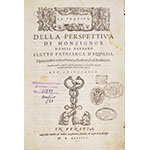 Born in Venice, Barbaro studied philosophy, mathematics, and optics at the University of Padua. He had a significant political career serving the Venetian Government as ambassador in London, patriarch of Aquileia, and representative of the Venetian Republic to the Council of Trent in 1561. His fame is chiefly due to his vast output in the arts, letters, and mathematical sciences. A cultured humanist, he was a friend and admirer of personalities such as Andrea Palladio (1508-1580), Pietro Bembo (1470-1547), and Torquato Tasso (1544-1595). His works include: an edition of the commentaries on Aristotle's Rhetoric by his great-uncle Ermolao Barbaro (Venice, 1544); an edition of Ermolao Barbaro's Compendium scientiae naturalis (Venice, 1545); a translation with extended commentary of the Dieci libri dell'architettura di M. Vitruvio [Ten books of architecture of M. Vitruvius] (Venice, 1556), which he later published in a Latin edition (M. Vitruvii de architectura, Venice, 1567); an important treatise on the science of painting (La pratica della perspettiva [The practice of perspective], Venice, 1569); and an unpublished and unfinished treatise on the construction of sundials (De Horologiis describendis libellus, Venice, Bibl. Marciana, Cod. Lat. VIII, 42, 3097). The latter work was supposed to have discussed other instruments as well, including the astrolabe, the planisphere of Juan de Rojas, the cross-staff, the torquetum, and Abel Foullon's holometer.