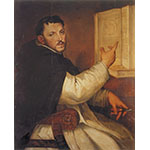 A member of the Dominican order, Danti served as cosmographer to Cosimo I de' Medici (1519-1574) and drafted the maps that, still today, decorate the cupboards of the Sala delle Carte [Map Room] of the Palazzo Vecchio. He made notable contributions to the improvement of scientific instruments. He was the author of widely circulated texts on the construction and use of the astrolabe and on astronomical topics. He mounted astronomical instruments - a quadrant and two equinoctial armillae - on the façade of the church of Santa Maria Novella, still visible today. In the same church, he began the construction of two gnomons but was unable to finish them because, after the death of Cosimo I, he was forced to leave Florence in circumstances never fully clarified. He moved first to Bologna, then to Rome. In Rome, as the cosmographer of Gregory XIII (1502-1585, Pope from 1572), he played an important role in preparing the maps displayed in the Vatican palaces. He became bishop of Alatri (Frosinone), where he died.