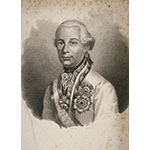 Grand Duke of Tuscany from 1790 to 1824, succeeding his father Peter Leopold (1747-1792) when he became Emperor of Austria. Ferdinand moderated or abrogated many of Leopold's reforms. When Tuscany was occupied by the French - first in 1799, then in 1800 - the Grand Duke was forced into exile. In 1802, he received the Principality of Salzburg by way of compensation. Under the French Restoration that followed the Congress of Vienna (1814-1815), he was reinstated as Grand Duke of Tuscany.