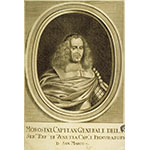 Descended from an old patrician family established in Venice since the twelfth century, Francesco Morosini served for many years as the commander of the fleet of the Most Serene Republic. Governor of Candia (Crete), resisted the Turkish siege for eighteen months before surrendering in 1669. Between 1684 and 1688, led the Venetian reconquest of the Morea (Peloponnese). This won him the title of "Peloponnesian" and election as Doge of Venice on April 3, 1688.