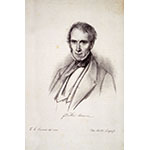 A brilliant pupil of the mathematician Paolo Ruffini (1765-1822), he obtained a degree in engineering and architecture from the University of Bologna in 1807. In 1810, he was appointed professor of geometry and algebra at the Liceo of Modena, his native town. Five years later, in 1815, he moved to the Faculty of Philosophy of Modena where he taught geometry, algebra, and spherical trigonometry. After 1825, he devoted himself to the construction of optical instruments. In 1831, he was appointed by the Grand Duke Leopold II of Tuscany as head of the astronomical observatory of the Museo di Fisica e Storia Naturale of Florence. He held this position until 1859, when, because of his age, the Government of Tuscany put him in charge of microscope observations for the Museum, also appointing him honorary professor of astronomy. Amici worked in several scientific fields - optics, astronomy, natural sciences - and left a significant record in all of them. He produced optical systems of very high quality whose power exceeded the prevailing levels. From his accounts ledger, we learn that he made about 300 microscopes; he also produced excellent telescopes, micrometers, camera lucidas, and other equipment.