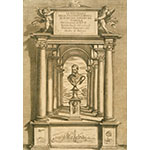 A painter, architect, and author of treatises, Vignola began his career in Bologna as a painter and designer of patterns for inlaid woodwork. In 1536, he made his first trip to Rome, where he surveyed and studied ancient monuments. This experience provided material for his magnum opus, Regole delli cinque Ordini d'Architettura [Rules of the five Orders of Architecture] (Rome, 1562). In 1541-1543, he worked at the Château of Fontainebleau (France). On his return to Italy, he was asked to oversee the construction of the church of San Petronio in Bologna, competing successfully with Giulio Romano (c. 1499-1546) and Andrea Palladio (1508-1580) for the design of the façade. In 1550, he returned to Rome where, thanks to a recommendation from Giorgio Vasari (1511-1574), he was named architect to Julius III (1487-1555, Pope from 1550). For the Pontiff, he built the small church of San Andrea on the Via Flaminia, the Villa Giulia, and the Palazzo Farnese in Caprarola. Barozzi was also responsible for installing the Orti Farnesiani [Farnese Gardens] on the Palatine and for designing the Chiesa del Gesù, which remained the model for Jesuit churches throughout the seventeenth century. After Vignola's death, and at the request of his son Giacinto, Egnazio Danti (1536-1586) printed the artist's manuscript treatise on Le due regole della prospettiva pratica [The two rules of practical perspective] (Bologna, 1583).