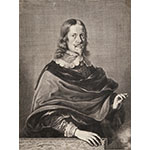 A student of jurisprudence at the University of Leiden, Johannes Hevelius (Hovel) traveled to Switzerland, London, and Paris, where he met many leading astronomers including Pierre Gassendi (1592-1655). On his return to his native Danzig to complete his law studies, published Selenographia, sive Lunae descriptio (1647). The work became famous for its accurate illustrations of the lunar surface, but the author's system for naming the Moon's features did not survive except for the term mare [sea], given to large dark plains. It was replaced by Riccioli's system, which used the names of great astronomers and mathematicians. In 1668, published Cometographia, in which, by analogy with the motion of projectiles on Earth, he developed the theory that comets moved on parabolic paths. Built goniometric instruments and a large number of telescopes. These were among the most important of his time, including a model 150 feet (45 meters) long. They were described in detail in Machina coelestis, pars prior (1673), followed by Machina coelestis, pars posterior (1679). In 1690 came the posthumous Prodromus Astronomiae, a catalogue of 1,564 stars containing the famous Firmamentum sobiescianum, sive Uranographia, a collection of 50 splendid pictures of constellations. Hevelius gave names to eleven new constellations, seven of which remain in use. He also measured atmospheric refraction and compiled important observations of the planets, the penumbra of sunspots, and the bright regions of the Sun's surface, for which he coined the term faculae, still used today.