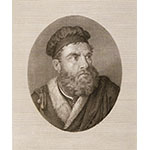 Venetian merchant and traveler, set out for Asia in 1271 with his father Niccolò and uncle Matteo, reaching China by land. Received at the court of Emperor Kublai Khan, Marco Polo spent several years there, undertaking diplomatic missions in Tibet and Burma. After his return to Venice in 1295, was taken prisoner in battle by the Genoese. While in captivity, dictated the account of his travels to Rustichello da Pisa. The text, originally written in French, was translated into Italian under the title Il Milione (from Emilione, an epithet applied to Marco's family). Freed in 1299, he spent the rest of his life in Venice.