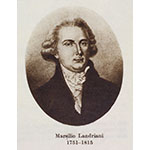 Born into a Milanese patrician family, Landriani was appointed Regius Professor of Physics at the Ginnasio [College] of Brera in 1776. In 1775, he published Ricerche fisiche intorno alla salubrità dell'aria [Physical researches on the salubrity of air], one of the earliest examples of chemical analysis of atmospheric air undertaken in Italy. His work described what he called an eudiometer: an instrument to measure the quality of air. Through a series of original experiments, Landriani explained the nature of different gases, the atmosphere, respiration, and animal heat. Although many of Landriani's explanations later proved superficial or wrong, his eudiometer and his experimental approach to the isolation of gases had great success throughout Europe. His instruments were used by Joseph Priestley (1733-1804) and Antoine-Laurent Lavoisier (1743-1794), among others.