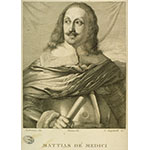 Son of Cosimo II (1590-1621), commander of the Medici army, achieved particular distinction in Germany during the Thirty Years' War (1618-1648). Under the government of his brother Ferdinand II (1610-1670), was named chief military administrator of the Grand Duchy of Tuscany. From Germany, Prince Mattias brought back to Tuscany many instruments (superb quadrants, astrolabes, compasses, and mining and surveying instruments) signed by famous craftsmen and suppliers of the leading European Wunderkammern ("Chambers of Wonders"). On July 12, 1654, Mattias's instruments were deposited in the Uffizi, imparting a more European character to the Medici collection.