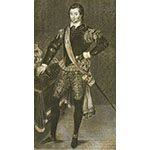 Son of Robert Dudley, Earl of Leicester, minister and favorite of Elizabeth I. Studied at Oxford. Geographer and naval engineer. In 1596, took command of an expedition to the West Indies. In 1605, left his wife and children in England and moved to Florence, where he married Elizabeth Southwell in a Catholic ceremony and entered into the service of Grand Duke Cosimo II (1590-1621), then Ferdinand II (1610-1670). For the Medici, Robert Dudley designed and built ships, engineered the draining of the marshes between Pisa and the sea, and expanded the port of Leghorn, convincing the Grand Duke to declare it a free port and thus attract many English traders. His chief contribution was the Arcano del mare [Secrets of the sea], a monumental treatise on the science of navigation. Dedicated to Ferdinand II and first published in three volumes in Florence between 1646 and 1647, it provides essential documentation on Dudley's work in cartography and naval-instrument making; it is also the first sea atlas ever published. Dudley bequeathed his estate to Grand Duke Ferdinand II, including a large collection of scientific instruments: some he had invented himself, others had been built by the ablest English craftsmen of the Elizabethan Age.